Hardeman originally out of Texas 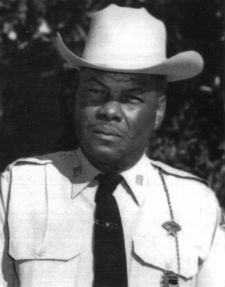 Tarrant County can also lay claim to another highlight this Black History Month and that is the career and accomplishments of Wesley Hardeman, the first African-American deputy sheriff in all of Tarrant County.That might not seem exceptional were it not for the fact that Sheriff Hardeman, who lived from 1906 to 1966, served as a peace officer during the difficult Jim Crow years in the American Southwest. This was 1955, a time when colored people could not drink from the same water fountains as whites and the law was something Hispanics and blacks were often found studiously avoiding. But not Wesley Hardeman. He was early into the right side of law enforcement when he opened up his own detective agency before becoming a peace officer. In May, 2007 the 84th state legislature in a proclamation honoring Deputy Sheriff Hardeman paid tribute to his “strong religious faith expressed in countless acts of kindness.” Hardeman was exceptional, it stated, in that “he faced challenges above and beyond those confronting his white counterparts, including discriminatory personnel policies and threats to his family, he discharged his duties with exemplary courage, dignity and professionalism.”Sheriff Hardeman’s daughter, Bernice McDuffie of Lancaster, California, remembers that her dad was not supposed to arrest white people but he did. She recalls one bad moment when her dad and his partner and her were driving in their police cruiser and two white officers pulled them over, arrogantly shining flashlights in their faces. They wrote a ticket to the partner even thought they knew full well who they were. The man who appointed Mr. Hardeman in 1955, Sheriff Harlon Wright, was later voted out of office by hostile electors at the next election even though local TV had proudly covered Mr. Hardeman’s appointment as deputy. Deputy Sheriff Hardeman was to win many awards for his skill and abilities and fair-mindedness, something the community evidently appreciated as they made him Grand Marshall at many county functions and invited him to speak in area high schools on good citizenship. Black History Month should remember Wesley Hardeman – a man who weathered the storm thorough faith and family.

In a Dallas city directory from 1948, there is a listing for Hardeman’s Barbecue. In fact there were two at the time, both of which were located in what was known as Freedman’s Town. It was a segregated African-American neighborhood just north of downtown in what is now Uptown. Those barbecue joints are what built the foundation for a barbecue family that flourishes today – a family whose longevity in Dallas barbecue is eclipsed only by families named Bryan or Dickey. Chester Field Hardeman’s surviving family isn’t sure which barbecue joint came first, or precisely what year it opened, but the photo above (with the 1948 plates on the Cadillac) and the Dallas Negro City Directory 1947-48 confirm that the Hardeman family was running two joints by 1948. As far as his family knows, this was the genesis of the Hardeman’s Barbecue legacy that endures with three current locations in South Dallas. Chester’s granddaughters, Sarah and Gloria, run their own restaurants on Scyene and Kiest respectively, and Gloria’s son, Jameon, is at the helm in Oak Cliff on Westmoreland. There are no published profiles of Chester Field Hardeman, so his history before the 1930 census is unclear. He was born in Texas in 1901, probably in Travis County. By 1930 he was living and working in Dallas as a landscaper. From a Dallas directory published in 1942 and the unprecedented detail in the 1940 census we know that he rented a house at 1726 N. Central with his wife Annie. By then his occupation was listed as “expresser”, which was probably a delivery truck driver. His family isn’t sure what prompted him to become a restaurateur, but Sarah wasn’t surprised that he jumped into it. “He was always doing something. If it wasn’t barbecue, he’d be selling watermelons, used furniture; he was just a businessman.” He would also have noticed the booming popularity of barbecue in the neighborhood. In the Negro City Directory 1941-42 for Dallas there are advertisements for Alabama Barbecue’s “Hickory Cooked Meats” and Foster Barbecue who “Slow Cooked with Hickory Wood.” There were 23 barbecue joints in the directory (the cuisine even had its own heading in the slim book) at a time when the black population of Dallas was just over 50,000. Today, the city of Dallas has a population just under 1.258 million and about a hundred barbecue joints within the city limits. Barbecue might be hot today, but nowhere near as popular as it was with the black community in the forties.